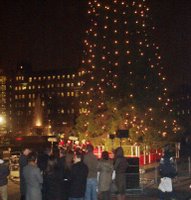 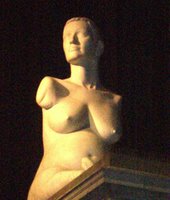 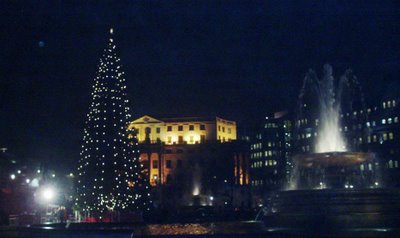 Took a night-time stroll through Trafalgar Square about 8.30pm on Thursday December 21st, and these are some of the scenes. The daytime throngs of tourists were gone from around the fountains and the bronze lions at the foot of Nelson's Column but there was still some activity. A small crowd watched carol singers being filmed under the giant Christmas tree in one corner, but the rest of the square was deserted and calm. The ground was beginning to glaze over with ice from the chilly weather and did not invite walking. Still I was drawn to the white marble sculpture of Alison Lapper which now graces the Fourth Plinth in Trafalgar Square.

Many public figures (including Nelson Mandela) were considered for the once empty fourth plinth, but the honour went to disabled artist Alison Lapper who was born with shortened legs and no arms. Sculpted by Marc Quinn and unveiled in September 2005, the sculpture shows Lapper when she was over 8 months pregnant, and represents the only female figure in the square. The other statues in the square are darkish in colour (Nelson is pale - probably white marble too - but he is so far up in the sky that he hardly comes into the reckoning at ground level). And, lit up from below, Lapper's portrait glows radiantly at night. And it was this that stopped me going straght into the underground station as planned - and drew me into the square instead.

Posted by Wordsbody at 7:22 PM