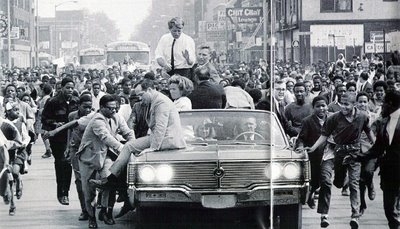 The Dream that died: Robert 'Bobby' Kennedy in Detroit a month before he died.

These pictures, from the Weekend Magazine section of yesterday's Guardian, recall the tragedy Senator Robert 'Bobby' Kennedy's assassination. Seeing this image of his motorcade besieged by Detroit's blacks evokes the euphoria of the almost certain sweep to the White House after his slain brother, JFK. The sweep was never to be, ended in the kitchen of the Ambassador Hotel in Los Angeles; and the famous of picture of Bobby's death mask as he lay dying. Seeing this street-full of blacks running after him underscores his standing within the African American community, most of whom would have had no problems voting him into the White House.

And this kind of adulation among the blacks was not surprising, considering he had been an advocate of civil rights. He also gave his 'A Tiny Ripple of Hope' speech in South Africa in 1966 - among the greatest speeches of the 2oth century.

When Diana died in 1997, the task of speaking to the moment fell to a fresh faced Tony Blair, still unsullied by his own 'axis of evil' (9/11, the war on terror and Iraq). When Martin Luther King was killed on April 4, 1968, the task of speaking to the moment and calming a shocked American nature fell on the shoulders of Robert Kennedy who had lost his own brother to the bullet, and to which he would soon lose his own life. About to give a speech on a podium in Indianapolis, someone whispered in Bobby's ear that King had just been killed. Kennedy abadoned whatever speech he had prepared and spoke instead from the heart about King's death. He broke the "sad news for all who love peace" to his audience, reminding blacks who might be filled with hate at the killing that he had also felt the same, having lost a member of his own family the same way, "but he was killed by a white man." It was also one of his greatest speeches.

There are those who say that Bobby Kennedy was a greater man than JFK - and I am inclined to believe them.

The Guardian Weekend's spread recalls in words and images the 'The Night Bobby Died', the recollections come straight from the memory of several among Kennedy's campaign team. "Where were you when you heard about JFK's death?" - is a question they say most people of a certain age can readilly answer. It would appear that many can also recall the same regarding Bobby.

We can expect a lot of Bobby nostalgia coming our way, thanks to a new film on the assassination directed by Emilio Estevez. Martin Sheen's son, Emilio reverted to his father's original family name, while his brother, Charlie, stayed a 'Sheen'. Emilio Estevez was one of the bright young things of Hollywood in the 80's, starring in St Elmo's Fire - which brought to the fore then new stars including Demi Moore, Judd Nelson and Rob Lowe. Estevez would later become known mainly for being (for a time) Paula Abdul's husband and was eclipsed by the tabloid antics of his brother Charlie Sheen.

Having contented himself in recent years with films like The Mighty Ducks, Bobby (starring the likes of Laurence Fishbourne, Demi Moore, Sharon Stone and Lindsay Lohan) may be a new high in Emilio Estevez's 'patient' career. 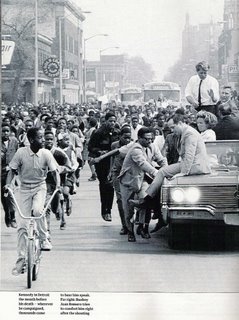 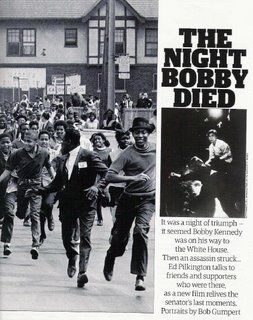 Posted by Wordsbody at 9:36 PM