An Orange Revolution - in words & images 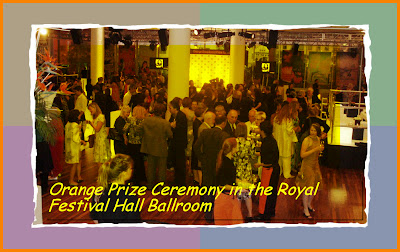 Chimamanda's Night of Glory
By Molara Wood
*published in This Day, 8 June 2007

As widely predicted, Nigerian writer Chimamanda Ngozi Adichie triumphed at the 2007 Orange Prize for Fiction on Wednesday night, winning the award for her second novel, Half of a Yellow Sun. 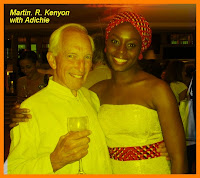 Going to the Royal Festival Hall venue of this year's ceremony, one could be forgiven for missing one's way. The prestigious centre of the arts on the banks of the River Thames had been closed for some time, and scaffolding was still up around the building and doorways were sealed. Guests had to walk around the building. But once they got to the functioning entrance, it was splendour all the way. The Royal Festival Hall would be officially re-opened to the art-going public in just two days, but the Orange Prize Ceremony allowed a magnificent preview.

Two Olympic style flames burned on either side of the expansive orange carpet that led from the sidewalk into the venue, up the wide stairways and all the way to the Ballroom in the belly of the Royal Festival Hall, where it was all going to happen. It was already teeming with people, with more arriving by the minute. Made up mostly of writers and book lovers, it was at least a more representative crowd than the Shortlist Readings, which took place the night before in the Purcell Room, part of the same South Bank Complex that includes the Royal Festival Hall. 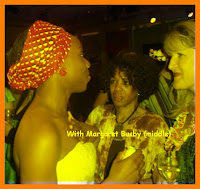 The Shortlist Readings of Tuesday 5th June saw a sold out audience made up of mostly middle class white women. And very few men. As for the blacks, there were only five; four women and one man. The reading went well, but the night ended on a sour note for Chimamanda Ngozi Adichie, who finished signing autographs only to find that her bag had been stolen. The author lost her personal effects and, painfully, a notebook in which she had written preparatory notes for her next novel.

But when Chimamanda arrived at the Orange ceremony, nothing in her bearing betrayed the upsetting loss of the night before. Wearing a cream dress with a bold red midriff sash made from the same material as her headwrap, she looked every inch a winner. It was a long road from the 2004 Orange Prize, for which Chimamanda was short-listed, for the first time, for her debut novel, Purple Hibiscus. She was relatively unknown then, and left empty handed as Andrea Levy scooped the prize. Much has happened since, and Chimamanda is now a bonafide literary celebrity in her own right on the international stage. And in the run up to this year's prize, British bookmakers William Hill and Ladbrokes made her the odds-on favourite to win. Chimamanda, still only 29, was the woman to beat.
' 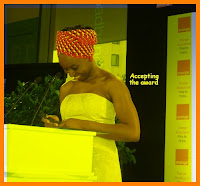 As the ceremony began, Orange Prize co-founder and honorary director Kate Mosse, took the stage to declare that this year's was one of the best-selling shortlists ever. The paperback edition of Half of a Yellow Sun alone has sold 187,000 copies in Britain since its release in January. With a line-up including Kiran Desai (short-listed for her Booker Prize winning novel, The Inheritance of Loss) and Xiaolu Guo (for 'A Concise Chinese-English Dictionary for Lovers'), Mosse told the gathering that this was also the most international shortlist ever, "with representatives from every continent."

Flying the flag for the whole of Africa, Chimamanda watched as the preliminary awards were announced. A trio of shortlisted authors, Guo, Rachel Cusk (Arlington Park) and Joanne Harris (The Observations) kept each other company nearby. Desai, wearing a stunning Indian sari, was further away in the gathering. Completing the shortlist of six was Anne Tyler (for Digging to America) who was not present. According to the chair of the judging panel Muriel Gray, Tyler is "notoriously reclusive and never leaves Baltimore." Representatives stood in for Tyler at the reading and at the award ceremony.

The Orange Award for New Writers came first, and it went to Karen Connelly for another war novel, "The Lizard Cage", set in Burma. As she read a prepared speech, I leaned over and asked Chimamanda if she too would read from a note on winning. The author replied that she had no speech prepared. "Being favourite is the kiss of death," she said. "I will not be surprised if I do not win."

We didn't have long to wait, because Muriel Gray was soon back on the stage to announce the big prize. "There is absolutely nothing controversial about this year's shortlist," she declared, informing that the judges (including seasoned profiler of African writers, Maya Jaggi) were unanimous in their choice of winner. 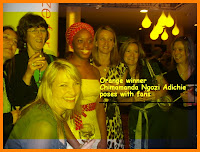 Then Chimamanda's name was called out, to sensational reactions in the Royal Festival Hall Ballroom. The author went on the stage to accept the limited edition winner's bronze statuette known as the "Bessie" drawing laughs when she declared herself happy to take home "this little thing with its cute breasts." She mentioned that, "Writing is the only thing I really care about," and added that she had to go and make a call to her family in Nigeria. Chimamanda's editor, Mitzi Angel, later described the author's onstage performance as "poised" and "controlled" - adding that, "She does the same in her writing. She is always thinking, and she cares deeply about her country. She will become one of the most important writers in the world." 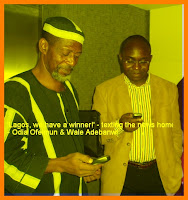 In the razzle and dazzle of cheers and press photographs that immediately followed, Kiran Desai was the only shortlisted writer who got the chance to congratulate the new Orange prize winner before she was whisked away from the gathering for media formalities. Others would have to wait until her return, but the Nigerian writers who had come to support their own, were allowed to accompany her through a series of behind-the-scenes interviews and photo-calls. The Nigerian party comprised scholar/writer Wale Adebanwi, journalist Tolu Somolu and myself; all three of us were at the Orange ceremony three years before, when Chimamanda first appeared on the shortlist. 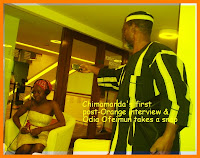 Poet Odia Ofeimun, fresh from his participation at the 12th International Poetry Festival in Cuba, had stopped over in London to attend the Orange ceremony. He said of Chimamanda's win, "It is a confirmation of what the world always knew, that good literature comes from Nigeria. She is a very good representation of the best that comes out of the country." Ofeimun added that, "There is this wise old woman's way to her youthfulness, which makes it imperative that we listen to her. The great thing is that she is very young and has a huge future ahead." 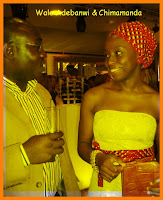 Adebanwi, who interviewed Adichie on the publications of both her books, said, "I am very excited because I knew it was only a matter of time for Chimamanda to win a big prize." He observed that, "She's got the capacity to tell the traditional African story by the moonlight with a refreshing modernity that is extremely powerful. We should be proud of her." Adebanwi felt that the theft of Chimamanda's handbag was strangely prescient. "Maybe losing her bag was an indication of a new story. What was taken away yesterday has been returned in a wonderful way today." 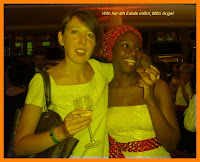 Chimamanda herself had seen the bag's loss as a bad omen. "I was thinking: this is not good." Winning the prize however, made her "very happy." She had come off the stage before realising that she didn't thank some people publicly, especially her editor Mitzi Angel. "Writing is something you do alone," Chimamanda said, "and it takes other people to help make things happen. I've been very fortunate to have Mitzi who understands my work."

The feeling is mutual for Mitzi, who never doubted that Chimamanda would reach the heights. "I feel very privileged to be publishing her." Asked if it had been a risky venture taking on a then little known Nigerian female writer, the editor replied, "I don't think of it in terms of risk. If someone's a good writer, it will become obvious to everyone. To me, Chimamanda was ahead of her game." 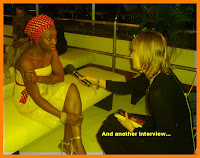 The author's publicist, Michelle Kane, had a strong feeling that she would win. "She is an extraordinary voice. It was time for her to be recognised and it was shown tonight. And she won it!"
And won it, she did. Asked what she thought her Orange triumph means, Chimamanda replied, "I hope it will open more doors, not just for Nigerian writers, but for African writers. I hope African writers will see this and think that they can do it too. I remember when I was looking for a graduate programme in the US, and I saw that Edwidge Danticat had been at the same place; I immediately felt that since she had been there, I would be fine too."
The Orange Prize recognises excellence in women's writing, and the author's mind went to her fellow Nigerian female writers. "We are taking over from the men!" she declared.

We the Nigerians present had unrestricted access as Chimamanda gave radio and television interviews. She answered questions and posed for photographs while we sent frantic text messages to writers and artists in Nigeria to communicate the news. Kate Mosse came in with the winner's £30,000 cheque, a part of the ceremony that had been accidentally missed out on the stage. And so we were among the few witnesses to the belated presentation of the cheque, which made it all the more special. 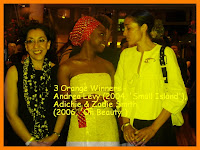 Prize-winning Zimbabwean writer Petina Gappah phoned through on my mobile and became the first to congratulate the new Orange winner by telephone. And there was still that phone call to the Adichie family to be made. But first, it was back to the ceremony in the Ballroom. Among those waiting to congratulate Chimamanda and talk with her, were: Zadie Smith (2006 Orange winner), Andrea Levy (2004 winner), Jackie Kay, Margaret Busby and John Agard. There was a wonderful evening ahead and - as many predicted on the night - a great future. In the end, it seemed clear that Chimamanda Ngozi Adichie's Orange Prize triumph had never really been in doubt.

Posted by Wordsbody at 9:57 PM