The Dilemma of a Ghost

Ama Ata Aidoo 's play, 'The Dilemma of a Ghost' has been touring the UK since 26th October - and is currently at The Africa Centre, Covent Garden, London. 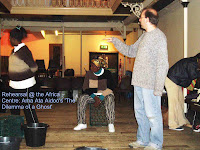 Directed by Michael Walling of Border Crossings, the production marks 50 years of Ghana's independence as well as the bicentennary of the Slave Trade's abolition. In the play, Americanised Ato returns to his people in Ghana with an African-American wife in too; and ghost from the slavery era wonders whether he should go to Elmina or Cape Coast... amongst other things.

I went to the Africa Centre to watch the players in rehearsal at the Africa Centre in October, and interviewed one of the leading players, actress Dzifa Glikpoe, who is the Artistic Director of the National Drama Company of Ghana. My interview with her is now available online. Other players in the production include Adeline Ama Buabeng, the leading Ghanaian actress of her generation. Trained by playwright Efua Sutherland, Buabeng is famed for the landmark roles she's played in Ghanaian theatre, including the title role in Sutherland's 'The Marriage of Anansewa. 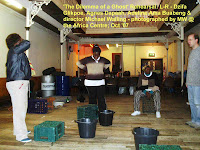 Was at a performance of the play at the Africa Centre on 6 November. The night also saw the launch of the special edition Border Crossings book published to coincide with the production, 'Theatre and Slavery'. The book was launched by Buabeng (director Michael Walling had become

'Africanised' enough to call her "Aunty Ama"). Also there was the scholar James Gibbs. A specialist in African Theatre, Gibbs (who attended the performance with his wife, Patience) is one of the contributors to 'Theatre and Slavery.

"Why Will you have 'Marriage of Anansewa and you go and do Shakespeare?" - Out-takes from my interview with DZIFA GLIKPOE

On the Mboguo (songs in-between stories in plays)
Dzifa Glikpoe: The Marriage of Anansewa for example has a story where Anansi sent photographs to four prominent chiefs promising to give his daughter to them in marriage and each one sent money and gifts, unaware of the existence of the others. Then when they were coming for the marriage ceremony, Anansi told his daughter to play dead. And one of the songs says: You are dead but you are alive; we will see how your funeral will be conducted! The Mboguo is there for a reasons, to advance the plot. 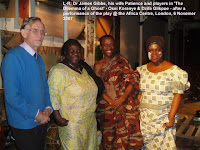 On Ama Ata Aidoo
Dzifa Glikpoe: I read one of Ama Ata Aidoo’s works, a novel, titled ‘Changes’ – centred on women’s issues. One woman - married, well educated, high position - and thinks she knows her rights. The husband says I want sex and she says, ‘I’m not ready’ – and it becomes a tug of war. And the other woman - uneducated, also married but she accepts her position as a wife. The uneducated woman looks at the educated one with envy. The educated woman leaves her marriage and acquires a boyfriend but he’s married – so when you need him, he’s not there. So you end up frustrated. But the way [Ama Ata Aidoo] handled the issue of marriage, and women’s rights... I fell in love with the book. So I asked her if we could adapt it into a screenplay so the film could reach more people who don’t normally read novels. And she agreed, although I’ve not found the time to do it yet.

Anything like the Nigerian Nollywood film phenomenon in Ghana?
Dzifa Glikpoe: Unfortunately, no. I was talking to a producer the other day who claimed Nigerians learnt the ropes from us (Ghana) and I said fine, but they’ve overtaken us! I came to Nigeria to do a production with Liz Benson and I saw the way they went about it. They were very particular, very meticulous. There was a house they wanted to use but had to wait 10 days for the owner to give permission. 10 days of waiting. Because the house was ideal – the character was to be a high class lady and must appear in a certain way, they would not compromise until they got the house. They went and bought costumes, rented some – all for production. But while you have a lot of money, we don’t... And no matter how much they sink into the production, they are able to recoup it. Someone asked if we do films every week in Ghana, I said: ask me if we do them every month! We don’t have that in Ghana, because our market is very small. But we patronise Nigerian films a lot in Ghana. The producers... it’s more economical for our producers to buy the rights from Nigeria and sell copies in Ghana – that way they don’t have the productions costs. And so, our own productions are suffering now. 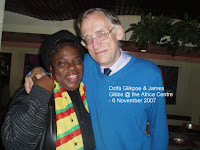 But there are issues with the quality of a lot of Nollywood movies
Dzifa Glikpoe: Yes. Some are good. I particularly am always worried about the violence in many of the films. A Nigerian friend was saying: “I have been in Accra for seven months, and no one has offered to take me to their home, I don’t have accommodation.” But the films may have discouraged people in Ghana, because these are supposed to be a reflection of the society and so give a discouraging impression of Nigeria as a very violent society. But I’ve been to Nigeria before and I didn’t see that. We went to Enugu to shoot and everybody was nice. And so I want to think that there would be good stories where there is no violence, or the violence is very minimal – to give a more representative view. So there are very good Nollywood films, and there are very bad ones.

Posted by Wordsbody at 2:35 AM