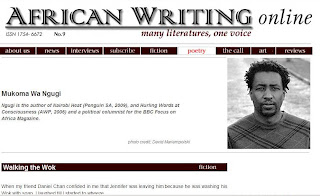 An array of spices and condiments make for a mouth-watering culinary exploration of culture in a globalised world, in Mukoma wa Ngugi's new short story, Walking the Wok - published in African Writing.

Chan's girlfriend leaves him because he's been washing his wok with soap, a no-no, something that threatens her shaky hold on Chinese authenticity. The Chinese students of his culinary college in Limuru are angry with him for messing with the wok, and the Kenyans say he's messing with their culture, thanks to his wild experimentations with local cuisine. What to do? How to cook - or live - in a way that's free of the shackles of the past? Walking the Wok invites second and third readings.

Excerpt
Mpishi Msanii College (aptly translating into The Artist Chef) rested in the outskirts of Limuru, on land donated to the colonial government in the 1940’s by Lord Baring, and inherited by the African government in the 1960’s. Lord Baring carved the 10 acres from his 2000 acre ranch, declaring that Africa needed Africans with practical minds and practical skills, like cooking.

So started the Lord Baring Native Cooking School, where graduating from the three month course in British etiquette and cuisine assured students of work in country clubs and the homes of various wealthy colonials.

With the wave of nationalization and renaming that came with independence, or still-in-dependence as the witty amongst the natives called it, Mpishi Msanii College was born. The three month course in cooking pancakes, fried sausages, eggs and chips and broiled rabbit grew wings, becoming an intensive two year program that produced not cooks, but cosmopolitan chefs well-versed in local and global cuisines.

Posted by Wordsbody at 2:43 PM

Any relation to Ngugi wa Thiong'o?

His son, as it happens.