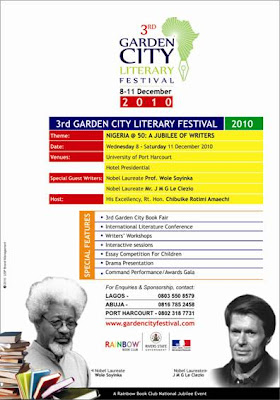 The third Garden City Literary Festival starts in Port Harcourt tomorrow and goes on till Saturday, December 11. Two Nobel laureates, Wole Soyinka and J.M.G Le Clezio, will hold a historic conversation in front of a festival audience, in what promises to be the golden ticket of the GCLF.

Helon Habila, Adaobi Tricia Nwaubani and Zainabu Jallo will hold workshops, there'll be a book fair, photo exhibition, role models will read to children, and 50 writers will be honoured as a special gala for their contribution to Nigerian literature. There are 2 stage plays, including Odia Ofeimun's dance drama 'A Feast of Return' which will be performed at Government House, Port Harcourt on the 11th. It's a packed programme.

Festival organisers have also released information about a Literature Conference taking place during the GCLF. See below:


INTERNATIONAL LITERATURE CONFERENCE
THEME: NIGERIAN LITERATURE AT 50: CHALLENGES AND PROSPECTS
Key note speaker: Prof. Olu Obafemi, University of Ilorin
In keeping with our vision to create a forum where great minds converge to deliberate on pertinent literary topics, we would be organising a literature conference to be facilitated by the Rivers State chapter of the Association of Nigerian Authors (ANA) which will feature a cross-section of seasoned writers specialising in different genres. The conference will be one of the opening events of the Garden City Literary Festival and will take place on Wednesday the 8th of December at the Hotel Presidential in Port Harcourt. Participants at the conference will examine how Nigerian writing has evolved in the post-colonial era; looking at the highs and lows of the last five decades, while also looking ahead to what the future has in store for the next generation of writers, publishers and indeed readers.
The focus of this one-day conference will be the vast and varied genres of Nigerian writing; from fiction to non-fiction, poetry to drama, children’s literature to works written in local languages and literature that has sprung out of the Niger Delta region.
This conference will be a veritable melting pot of knowledge and ideas and the audience will have the unique opportunity to debate on the issues raised by speakers in order to form a consensus on the way forward for Nigerian writing based on lessons learned from the challenges and triumphs outlined in the discussion.

Experts who would be delivering papers at the conference are:

UPDATE J.M.G Le Clezio will not make it to Port Harcourt after all. His doctors advised against the trip, after he fell ill in Mexico. So there you have it. But we're all here, as are tons of other writers. And the Great Soyinka will still make it.

Posted by Wordsbody at 5:56 AM