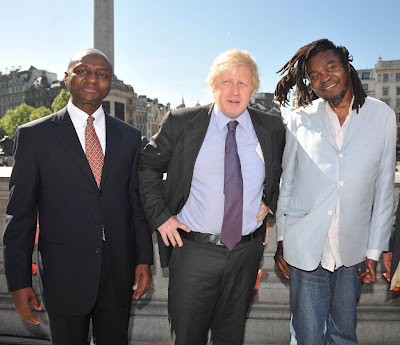 Tayo Aderinokun (left), managing director of the Guaranty Trust Bank, who died in London earlier today, was a major art patron. His longstanding support for the arts culminated in Yinka Shonibare's 'Nelson's Ship in a Bottle' sculpture, sponsored by Aderinokun's bank and unveiled in London's Trafalgar Square in May last year. He is here shown with London Mayor Boris Johnson and Shonibare. May Tayo Aderinokun rest in peace.

Toyin Akinosho on Aderinokun
“Of all the banks, the GTB, under his watch, put the most into those aspects of the arts that are non-commercial. He did better than the once-a-year little drops that Fidelity (Bank) put into writers’ workshops.”

Ben Tomoloju
“It’s a painful loss, so much that it has destabilised strategic assets of our cultural expression because he was a great benefactor of the arts both nationally and internationally... I am aware that the entire Aderinokun family has made one great impact or the other to the advancement of the Nigerian artistic heritage. His eldest brother, Eddie Aderinokun, is a highly respected poet and literary activist. Another, Kayode, is a notable poet and both were Vice President of ANA national and chair ANA Lagos respectively at a point in time.

“The late Tayo was all along a committed patriot and financier of various aspects of the arts. You will recollect that with his corporate status, he backed a pan-Nigerian poetry festival from 2009 to 2010. So the community of poets grieve profusely on this tragic turn. We wish the family, friends, corporate associates, especially the GTBank family, the fortitude to bear the loss. It’s also a personal loss.” 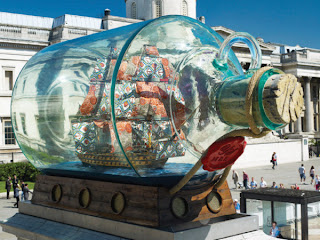 PEN Nigeria
Tayo Aderinokun – Adieu Ultimate Art Patron and Gentleman
PEN Nigeria Center joins the entire Nigeria arts community in commiserating with the Aderinokuns on the transition of their illustrious son Tayo.
We of the Pen Nigeria are expressing our heartfelt sympathy to his immediate and extended family and his business empire, especially in Guarantee Trust Bank, in this trying moments in the hope that our shared grief would reduce the impact of this colossal loss.
We bear this grief in the consolation that death is certain and that the impact of Tayo’s short but fruitful life as a giant in a small world of art entrepreneurship and patronage, will, for generations yet unborn, be a shining example.
We remember Tayo fondly as the quintessential gentleman of the arts and ultimate business colossus whose legacies would be etched permanently in our collective heritage. In a clime where art patronage and its quality are weak, Tayo exemplified the exemplary both in humility and commitment to all that he held dear.
His contributions to the Nigerian literary scene bear testimony to the ideals and objectives of PEN International and its Nigerian Centre.
We know we have lost him in person and physical form but we have gained him in ideals and ideas.
Our prayer is that the family, immediate and extended, culturally and economically be granted the fortitude to bear his huge loss.
For and on behalf of PEN Nigeria Centre

Posted by Wordsbody at 9:59 PM