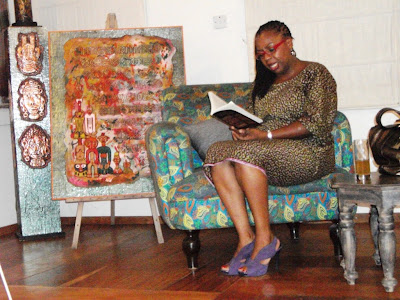 After the Unoma Azuah book launch on Saturday, it was a mad dash across Lagos to The Life House on Victoria Island for a set of readings by Lola Shoneyin. One session could be no more different from the one that followed, as the author engaged young ones first with her children's book, 'Mayowa and the Masquerades'. There were lots of whoops, dances and all sorts that kept the children interested as they interacted with the author. The real Mayowa, the author's firstborn after whom the protagonist is named, was also on hand to pull appropriate faces from the audience. It was a family affair as all her children were present and participated.

Then the session was over and the youngsters packed off home. Then commenced a more adult reading from Shoneyin's novel 'The Secret Lives of Baba Segi's Wives'. A reading that gave new meaning to the word 'intimate' - as she read to a small audience from Iya Segi's same-sex desire scene and Baba Segi's masturbation one. The reading lead to an unusually frank discussion about sex, sexuality, Nigeria's Same Sex Bill ("14 years," someone in audience said jokingly at this point, referring to the jail sentence attached to the law), men, women and octogenarians wanting divorce. You don't even want to know. If some of the men could blush, they would have. 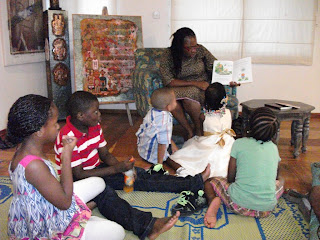