At the time of his death Chima was the Executive Director of the Civil Liberties Organisation (CLO) where he worked for 15 years. A committed human rights activist, Chima was remarkable for his unwavering dedication to social justice for ordinary Nigerians. Since his university days, Chima has been actively involved in shaping political events in Nigeria . He held a number of key positions: general secretary, Campaign for Democracy (CD), 1992 – 1994, joint secretary, United Action for Democracy (UAD), 1997 – 1998, general secretary, Democratic Alternative (DA), 1994 – 2001. He will long be remembered as a skilled and effective mass organiser and strategist.

He co-ordinated a trip of a representative from the African Liberation Support Campaign (ALISC) based in London to Nigeria in 1994. His last few months were taken up with coordinating the response to another increase in the price of petrol introduced by the federal government. Plans included the organisation of 16 rallies across Nigeria . Chima was killed in a car crash on the way back from a rally in Maiduguri on 21 September 2005. His untimely death is a terrible loss for his family and a huge blow to the movement in Nigeria . 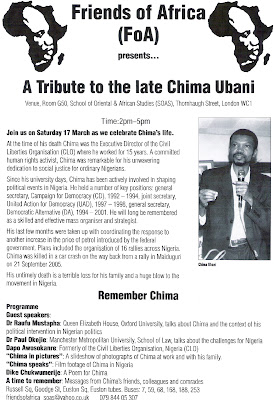 A Tribute to Chima Ubani

The late Chima Ubani, foremost pro-democracy activist and former Executive Director of the Civil Liberties Organisation (CLO) will spring back to ‘life’ on Saturday, 17 March, at the University of London.

On that afternoon, Friends of Africa, one of the students’ societies at the School of Oriental and African Studies, a college of the University, will pay tribute to Chima with a programme of events including talks, poetry reading, and filmic and photo presentations – all celebrating the life and work of this incomparable Nigerian. The event is being coordinated by Eki Gbinigie of the African Liberation Support Campaign Network, (ALISC Network). Guest speakers include Dr Raufu Mustapha, a lecturer in African Politics at the University of Oxford, Dr Paul Okojie who teaches law at Manchester Metropolitan University, and Dapo Awosokanre, formerly of the CLO.

‘Chima in Pictures’ will present photographs of Chima at work and with his family. ‘Chima Speaks’ will offer those who were not privileged to meet him while he was alive a rare opportunity to hear the late activist in film footage. Dike Chukwumerije, a rising Nigerian poet in the United Kingdom, will read poems dedicated to Chima. There will also be messages and eulogies from the late activist’s friends, colleagues, and comrades.At the time of his death in a car crash on 21 September 2005, Chima Ubani was the Executive Director of Civil Liberties Organisation (CLO), Nigeria’s premier rights advocacy group. He had worked in CLO in various capacities since 1989 when he joined the organisation after his national service, eventually to take over from Mr. Abdul Oroh as Executive Director in 2003.

But Chima did not restrict his labours on behalf of Nigeria’s oppressed and downtrodden to CLO. Indeed, he had begun his work as an advocate for civil rights and political liberty at the University of Nigeria, Nsukka, in the mid 1980s where he was General Secretary of the Students Union. To this day, UNN students and alumni remember that period in the university’s political history as the ‘golden years’ and the name ‘Chima’ is synonymous with vibrant, honest and dedicated politics committed to enhancing students’ welfare. Chima also brought this dynamism to bear on the wider Nigerian universities student body, playing a key role in the 1989 nation-wide students’ protest of General Babangida’s punishing Structural Adjustment Programme.

Chima was actively involved in shaping political events in Nigeria, a country he loved almost to distraction. He held a number of key positions: general secretary, Campaign for Democracy (CD), 1992-1994; joint secretary, United Action for Democracy (UAD), 1997-1998; general secretary, Democratic Alternative (DA), 1994-2001. A mass organiser, political thinker, and strategist of the finest pedigree, Chima brought humour, empathy, and the common touch to the difficult and often dangerous work of rousing ordinary Nigerians to stand up to their military oppressors.

He was harassed, calumniated, and detained by Nigeria’s unaccountable rulers several times during his career. But not for a single moment did he give in to despair or anger towards his tormentors. Indeed, he radiated love and optimism, focussing only on the brighter side of things. Chima always insisted that that there were no political ‘enemies’ in the struggle to win liberty for Africa’s oppressed, but only opponents, who, he was convinced, would change their ways when they were properly educated about the beauty of democracy, human rights, and life more abundant for all.

Chima Ubani’s last months on earth were taken up with coordinating the response to another increase in the price of petrol introduced by the Federal Government. Plans included the organisation of 16 rallies across Nigeria. He was killed in a car crash on the way back from a rally in Maiduguri on 21 September 2005.
It is often said that individuals may make history, but that ultimately, important political victories are the handiwork of people and social movements. This may be true, but exceptional individuals make a most valuable contribution as their complete dedication, honesty, and leadership skills fuse people together to achieve these victories.

The late Chima Ubani was one such exceptional political leader. It is therefore fitting that tribute is being paid to a life lived for others at the University of London.

For and behalf of:

The Organizing Committee, Tribute to the Late Chima Ubani.
friendsofafrica_soas@yahoo.co.uk

I went to school with Chima, UNN. He was a few years my senior in Uni, and was the student’s union leader. Intelligent, articulate, fiery and a good guy.

Thanks for sharing your experience. Those like me who didn't know Ubani, are poorer for it. We owe him never to forget.