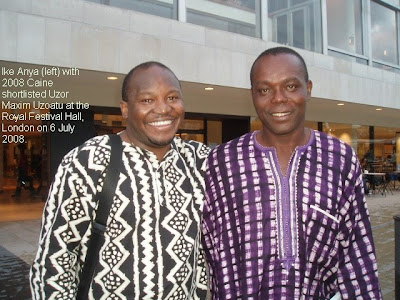 Ike Anya is something to everyone. To some, he is an astute travel writer. To others, he is a poet. He is also a good interviewer and a keen blogger. However people get to know Ike, they eventually get to know he is actually a medical doctor with one foot in the arts and the other in medicine.
Quoting Nnorom Azuonye's words on Ike Anya. "Something to everyone" - Nnorom can say that again.

Ike was recently appointed a Consultant in Public Health Medicine at the Hammersmith and Fulham Primary Care Trust. To the man who has achieved this great feat, it was just another blessing for which he was grateful, and not something to shout about. Ike's childhood friend and fellow public health doctor/co-blogger, Chikwe Ihekweazu felt differently about it, and together with his wife Ijeoma, they set up a fantastic reception in Ike's honour at the Cicada in London's Farringdon area on Friday, the 4th of July 2008. As the event kicked off I looked around. No Molara Wood. Shit! Who is going to write about this night?

No Molara Wood. But Nnorom stepped up, and wrote about it! Where there's a writer, no story goes untold. Read his account of the evening.

One always had this fear that Medicine would take Ike Anya away from us eventually, but judging from his recent showing, we need not fear too much. One of his trademark writer's interviews - a discussion with the author Sefi Atta about her recently published novel, Swallow - was in the Nigerian Guardian of 20 July. Anya also co-edited the just published Weaverbird Collection of short stories by Nigerian writers; his fellow co-editors for the collection being: Akin Adesokan, Sarah Ladipo Manyika (whose first novel, In Dependence, is out soon via Legend Press, UK), and Ike Oguine. Contributors to the Weaverbird include: Ike Okonta, Victor Ehikhamenor, Tade Ipadeola and Unoma Azuah.
Posted by Wordsbody at 5:02 PM

Fantastic! A Doctor of no small LETTERS! It's really amazing how this marriage of art and science bonds so strongly. Keep the fire burning Doctor!