People Are My Clothes 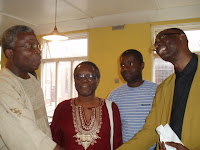 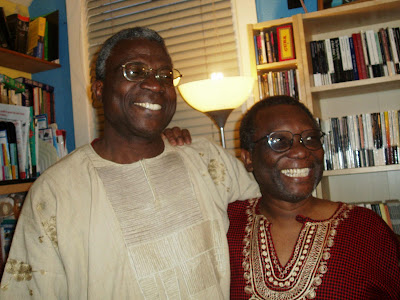 Niyi Osundare and Malawian poet Jack Mapanje in Leeds in 12 May. Mapanje revealed for the first time his role in the 1986 Commonwealth Poetry Prize, where he had to defend Osundare's book which was Africa's entry for that year. Osundare only heard the behind-the-scenes story at the reading in Leeds, and he joked to Mapanje, "You are a very wicked man! All these years, you never told me how it came about." Mapanje (who teaches at the University of Newcastle and introduced Osundare to his student, Nigerian Peter Adegbei; top right) also praised the Nigerian poets efforts in campaigning for his release from imprisonment by the Malawian authorities. Osundare's reply: "The effort we made to get you out; it wasn't me, it was you."


Osundare’s Tender Moments in the UK
By Molara Wood

Poet and scholar Niyi Osundare breezed through Britain earlier this month, making links with readers and writers, on his first visit to the country for several years.

Sandwiched between appearances in Huddersfield (Friday 11th May) and Plymouth (Sunday 13th May) was the city of Leeds, where Prof. Osundare studied for his Masters degree during 1973-74.

He spent Saturday 12th May as the guest of Peepal Tree Press (a publishing outfit devoted to Caribbean writing). The day was packed with activities including a workshop, reading and talks, as well as media interviews - organised by Kadija Sesay, literary activist and publisher of Sable Litmag of New Writing. Sesay first met Osundare when she chaired his reading at The Commonwealth Club in London in 2001. The poet featured on the cover of a 2003 edition of Sable. 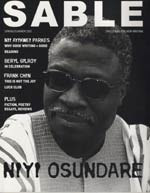 First on the agenda in Leeds was a workshop with the Inscribe Writing Group, led by Osundare. Inscribe provides support for writers of African and Asian descent. Among those taking the workshop was writer Rommi Smith who had introduced Osundare to his audience in Huddersfield the night before.

In attendance for the evening reading was Malawian poet Jack Mapanje, who paid tribute to his Nigerian counterpart. Mapanje was chair of the Africa panel when Osundare was up for the Commonwealth Poetry Prize in 1986. "I want to show off about it, that’s why I came," joked Mapanje, who had to defend Africa’s entry, when it tied with Vikram Seth, the contender for Asia. "I said, ‘There’s no African poet using orality who is as good as Osundare. This poet is going to go far in Africa.’" The Commonwealth Foundation raised the cash prize to £6,000 that year, so it could be shared between Osundare and Seth.

After Mapanje’s arrest by the Malawian authorities in 1987, Osundare served as his contact in Nigeria. "He got me on the Association of Nigerian Authors (ANA) who adopted me as their prisoner of conscience." 62-year-old Mapanje reminded Osundare that "he is not the only one" who has recently turned 60. The Malawian’s fifth collection was ‘The Last of the Sweet Bananas’ - so called because "I thought it would be my last." But he has surprised himself, and another collection, ‘Beasts of Nalunga’ - will be published in June. He presented an advance copy to Osundare, saying, "There are seven of us in Africa who belong to the so-called 3rd Generation who use orality - and [Osundare] is the best of us."

"This is a historic trip in many ways," Osundare told the audience, recalling his days at Leeds University. His links with the city have been kept up through Professor Emeritus Shirley Chew. Also in attendance, she edits the journal, Moving Worlds. Osundare has a long association with Peepal Tree, whose books are on his teaching lists. "The first batch of books I got after Katrina took my library was Peepal Tree titles sent by Kadija." He praised the "great facilitator" Sesay, telling her, "Immediately after Katrina you were the first person to talk to me from the UK, and I think our voices were tear-laden. Next time we talked, you said a computer was on the way." Peepal Tree is to publish Karen King Aribisala’s novel, ‘The Hangman’s Game’.

Mapanje laughed when told that he was "a very wicked man" for keeping the inside story of the 1986 Commonwealth Prize from Osundare for two decades. Then it was on to the reading, which the Nigerian poet said should be a two-way process. So the audience sang the chorus as he performed a piece from his volume, ‘The Word is an Egg’ - title derived from a Yoruba saying. "I took it from orality, of course not forgetting the written and electronic tradition."

Osundare discussed Hurricane Katrina, which hit New Orleans in August 2005. "Katrina came, saw and nearly conquered. It threatened me and my family with two kinds of death - material and physical." He lost all his possessions. "We didn’t see the American government; till now we haven’t seen the American government." The American people, however, have been wonderful. "I came out of my house with only shorts, no shoes. The Red Cross gave us clothes." The second poem rendered, ‘People Are My Clothes’, means so much more, post-Katrina.

‘Letter from the Editor’ touched on the dilemma of the African writer seeking recognition in the West. "Many African writers have ended up the kind of writers they never wanted to be, in order to be published Europe," Osundare observed. "In the end, they don’t make it here and they will not be read with any respect back home." Osundare is "old fashioned" in the sense that he believes art should have a purpose. "Growing up, my parents, though uneducated, used to say, ‘It is book we didn’t read; we read our inside’ - which relates to wisdom."

The poet is concerned that morality has become "a dirty word" - often dismissed as sentimentality. He recalled a writers’ meeting in the US where the Americans had "pretty poems" about nothing. They insisted that they had no issues. Right outside was a soup kitchen where the hungry waited on a long queue to be fed by charity. Osundare told his fellow poets, "That is a long issue!" This anecdote led to another poem, ‘The Large Heart’.

‘The Battle of Hastings’ is one of few surviving poems written for Jack Mapanje. "Katrina took all the poems I wrote for him," Osundare informed. ‘Waiting for the Rain’ (taken from a Hugh Masekela song and devoted to the singer) followed. "I never went to South Africa all the time it was under the Apartheid yoke. I couldn’t stomach it." However, the poet reminded that people like Ruth First show that it wasn’t just a black struggle.

Osundare’s new book, ‘Tender Moments’, is his first post-Katrina collection. It surprised many who see him as a political poet. But he insists, "I have a lot of love poems - written first in longhand - Katrina took them all." Afterwards, "I had nightmares, trying to remember the poems I lost. I had parapsychologists writing me to say, ‘We’ll make you remember.’" The healing process came naturally, and ‘Tender Moments’ is the result. Osundare read ‘Breaking Bread’ from the collection.

The poet’s home was submerged in nine feet of water during the Katrina. "I was there when my shelves were falling one by one." In the aftermath, all his books were buried in mud. The cover page of one of his collections was floating on water. Another book had swollen to four times its original size. "I felt the book was talking to me," hence the inspiration for another poem read in Leeds. ‘The Weeping Book’ is rhymed. "I don’t often rhyme," he said, "but when I am touched, I do."

Music (including Yoruba songs, Blues and Jazz) is a huge source of inspiration for Osundare, who comes from a singing family. He loved American popular music as a young man. "Otis Redding had a particularly strong impact on Nigerian youth in the 60s and 70s. He had such fantastic control over his voice. When we heard he had died in plane crash, we celebrated his life and mourned his death." Osundare ended the performance with his "favourite poem" - the one he wrote for Redding.

Asked how much lost property has been replaced since the Katrina, Osundare revealed that he and his family live in "a sort of dormitory." But, "It’s the books, the manuscripts and letters" written to him by students all over the world - that are the greatest losses, "because they cannot be replaced." Osundare had moved his manuscripts from the university to his home for ‘safekeeping’ prior to the devastation. "The university escaped the flood. Water has its own logic." He wrote many poems about Lake Pontchartrain, all now lost. "I wrote the poems for the lake and the lake came to take her poems away!"

It was a life-changing experience, one that needs to be written about. But the detail is proving very difficult in prose; poetry has been relatively easier. Osundare confided that, "I am learning about the process - on how poetry and prose play on the mind." Jack Mapanje is in a similar situation. "I still haven’t finished my prison memoirs in prose," he said.

Prof. Osundare discussed his recent birthday celebrations in Nigeria. Most touching were his students who raised an organising committee around the events. "In March, I was commandeered to come to Nigeria to celebrate my 60th. I know it wasn’t me they were celebrating, but the fact of survival." The poet was moved. "These are the people who are my clothes." 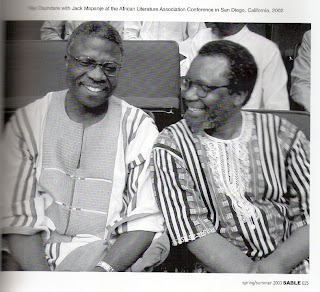 Niyi Osundare’s poem, I Sing of Change, will display on London Underground tube trains for 8 weeks from next month. He is one of 6 African poets whose works by will be seen by thousands of commuters.

Next to Mapanje at the ALA Conference in California in 2002 (picture taken by Kadija Sesay and featured in a 2003 edition of Sable Litmag for which Osundare was the 'spotlight' writer) . Osundare recalled the occasion, "I was afraid to sit next to this man - Africa's most famous prisoner after Mandela!"

Posted by Wordsbody at 1:34 PM

"art should have a purpose." indeed. i lived in new orleans just a few months before hurricane katrina. almost each time i visited the community book center (on bayou road) mama jennifer (one of the founders of the book center), would tell me how much she enjoyed niyi osundare's poems. i know she'll appreciate his post-katrina work. thank you for the article.