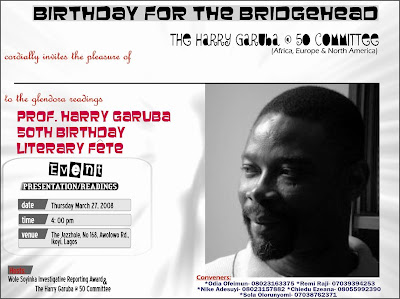 "BIRTHDAY FOR THE BRIDGEHEAD: Harry Garuba a Professor in the Centre for African Studies and Department of English of the University of Cape Town, South Africa, is internationally reputed for his innovative and ground-setting scholarship in the fields of Cultural Studies/Theory, Literatures of Africa and the African Diaspora, and Performance Studies/Discourse Analysis. A poet of note who has been described as having “a disposition for the tender and philosophical”, and whose collection, Shadows and Dreams heralded a new moment in its “alluring lyricism” and “introspective depth”, he taught at the University of Ibadan from the 1980s through to the 1990s – remarkable periods in Nigerian history and the flowering of African literature. At Ibadan, Garuba served as a mentor to an entire generation of writers, artistes and scholars, whose articulations coalesced into voices from the fringe, a movement that altered the dominant perceptions of arts and aesthetics."
.
Thursday 27 March 2008 - 4pm
@ The Jazzhole
168 Awolowo Road
Ikoyi, Lagos
Posted by Wordsbody at 4:54 PM

Glendora sent me the news hours ago.

I wish Harry Garuba many happy returns of the day and more laurels in his academic career.

Belated birthday wishes to you Harry. Another 100 years of inspiring generations.....