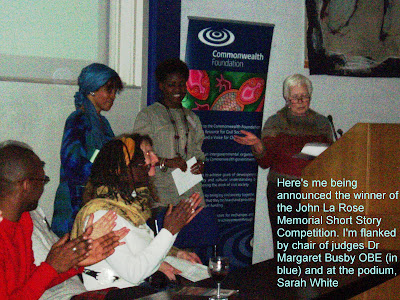 Grainy images tell their own tales too... My friend snapping the moment with my camera was too far away in the audience to get a clear image. Here's me being presented as the winner of the John La Rose Memorial Short Story Competition - at the 'On Whose Terms Conference, Goldsmith's College, London on 13 March 2008. The presentation was made by Sarah White (on the podium) and to the left in blue is Dr Margaret Busby OBE, chair of the panel of judges of the competition. Other judges were: R. Victoria Arana (of Howard University, USA), Kadija George (publisher of Sable Litmag) & novelist Courttia Newland. I won £150, 3 months free subscription to the New Nation newspaper and publication of the winning story - "Written in Stone" in Sable Litmag. 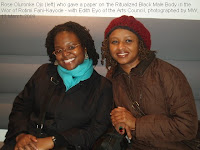 Dr Deirdre Osborne, organiser of the On Whose Terms Conference on the short story, founded this year in memory of John La Rose
"My sincere thanks to Sarah White and the trustees of the George Padmore Institute for agreeing that it was indeed fitting to put together a short story competition in his memory."

Sarah White on John La Rose and the competition
"I was John La Rose’s partner for 41 years [audience claps]. John was a poet, a publisher, a cultural and political activist. He was born in Trinidad in 1927 and came to England in 1961. He founded New Beacon Books in 1966, and was a co-founder with Kamau Braithwaite and Andrew Salkey of the Caribbean Artist Movement that same year. Over the years he was a leading member of numerous important organisations including the Caribbean Education in Community Workers Association, The Black Parents Movement, The Committee for the Release of Political Prisoners from Kenya, the New Cross Massacre Action Committee, and the International Book Fair of Radical Black and Third World Books. In 1991 he founded the George Padmore Instititute, a library, archive and educational resource centre of black material – Black British materials. He had wide international contacts and always kept in close touch with Trinidad... He died 2 years ago, in 2006. I am sure John would have been delighted to have a short story award in his name. Though he himself did not write short stories, or novels for that matter, he did enjoy reading them, and he valued highly the craft they entailed. In the 2 volumes of New Beacon Reviews, a critical journal which he published and edited in the 1980s, he always insisted on including a short story. John himself was a poet and essayist, and a very careful wordsmith, spending long hours fine-tuning his writing. Such skills are also needed for short story writing to portray a scene, an idea or a relationship – and then to be able to develop and bring it to a conclusion in the limited space available... He’d have been very appreciative of the skills that are needed for short story writing."
Margaret Busby OBE on the judging 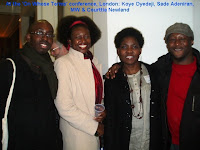 “Of course we wanted to bear in mind that the winning story had to have some element of the ideals of John La Rose.”

[She recommended the George Padmore Institute website for those wanting to know more about the ideals of John La Rose.]

“Eventually we decided to come up with a list that we thought represented the best of the stories submitted and what we were looking for in the stories was that, first of all, well crafted with a compelling beginning, middle and end; but also that they had stimulating, exciting writing style, interesting idea and some sort of imagination – and again relevant to John’s ideals. So we came up with a list of 10 stories we would put forward as highly commended and out of those 10 we’d choose the winner. Those stories were:

"I am very happy to congratulate the winner out of those 10 and that is Molara Wood, for “Written in Stone”. I have read the story, I think it was excellent."
. 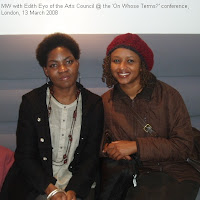 [She thanked Deirdre Osborne “for all the work she’s done” and thanked the judges.]
Accepting, I said...
"In this story, there’s a woman who has been sidelined by history and in the narrative her voice comes through very, very strongly. And, not only is she insisting that her story be told, she is setting the terms under which that story should be told... I’m really, really glad that the judges felt for it. I’d like to thank the panel of judges and I’m really, really honoured to be getting this in memory of John La Rose. Thank you."
Posted by Wordsbody at 3:07 AM

Congratulations for this great honour.

Congratulations! This has always been my prayers, that you will soon realise that you are what I said you are - A LITERARY ICON!

Congratulations ohhhhhhhhhh although I am missing the plates of rice and chicken in the pics...where dem dey?

Congratulations. Very nice to read about this. Winning stories warm the heart