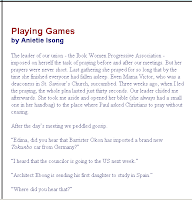 In Anietie Isong's Playing Games (published by Gowanus), a woman fears her young son may have joined a group of militants, but she may have more to fear from the gossip mongers in the Ibok Women's Progressive Association.

Nene, my cousin, called the gossip session the real meeting. I watched her closely as she mingled with the other women. I noticed for the first time how bony her hand was, how all the veins that ought to have been covered with healthy flesh stood out like the drawing of a school child. But Nene was not an old woman. It was too much hard work that had aged her. As the bread winner, she supported her family with sales of akara and other petty goods. As in my own case, her husband had left her for the world beyond.

“Are you all right?” I asked Nene after she had disentangled herself from the other women and we were making our way home.

“I am all right,” she said, laughing.

But there was something in the sound, something hidden, which troubled me. Near the village square Nene let it out: “I think Nsima has joined the Ibok Youth Movement.”

She said it quickly, as though the words scalded her tongue, spat the words out as one would spit out hot yam. And she did not look at me.
Posted by Wordsbody at 10:24 PM

Thanks MW for sharing this. Ani is a good friend of mine and I enjoy his short stories. This was one was really good.