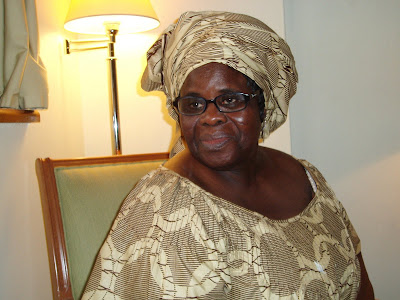 I took this photograph of Ama Ata Aidoo during an interview in Lagos last Sunday May 30.

Hear her
"I was lucky to have grown in an environment where maybe storytelling was part one’s living experience. I later realised that we had some kind of informal professional – would that be an oxymoron? – storyteller. You know, a man who was known as a storyteller (but he wasn’t earning anything from that). He was there in the village. Also, I had the good fortune of having for a Headmaster at one point when I was in Primary School in the same village someone who was very interested in getting us to tell stories to ourselves during the school hours. Maybe it was his way of making sure we didn’t fall asleep on him because we were kids and it can get hot. And this teacher not only had us telling stories to ourselves but every now and then over the weekend he would haul us around the surrounding villages, telling stories to the people. Incredible. I couldn’t have ordered this. If I had been aware that these were also helping me to become a writer. I couldn’t have known, but I suspect that it helped for me to have grown up in such an environment."

Posted by Wordsbody at 7:02 PM

Thanks for sharing! I just read Changes and liked it so much I wrote a blog about it. Love the blog, I'll be back to visit! :)