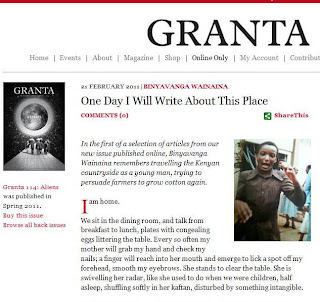 It's been argued in some quarters that Binyavanga Wainaina is the best thing that ever happened to the Caine Prize. It would seem Granta's views aren't that far off, as the journal now tells everyone who cares to listen that the Kenyan writer's essay, 'How to Write About Africa' is the most popular ever on its website. It will be recalled that the essay went viral after it was published years back, for its lampooning of European Africanists. Is there anyone left that hasn't read it?

Originally print-only, Wainaina's latest essay for Granta has now been made available on the magazine's website, so many more than freely enjoy it. Low viral potential, but a wonderfully observed piece all the same. ''One Day I Will Write About This Place' is from the writer's forthcoming memoirs of the same title.

A well-known dombolo song starts, and a ripple of excitement overtakes the crowd. This communal goosebump wakes a rhythm in us, and we all get up to dance. A guy with a cast on one leg is using his crutch as a dancing aid, bouncing around like a string puppet. The cars all have their interior lights on; inside, couples do what they do. The windows seem like eyes, glowing with excitement as they watch us onstage.

Everybody is doing the dombolo, a Congolese dance where your hips (and only your hips) are supposed to move like a ball bearing made of mercury. To do it right, you wiggle your pelvis from side to side while your upper body remains as casual as if you were lunching with Nelson Mandela.

I have struggled to get this dance right for years. I just can’t get my hips to roll in circles like they should. Until tonight. The booze is helping, I think. I have decided to imagine that I have an itch deep in my bum, and I have to scratch it without using my hands, or rubbing against anything.

My body finds a rhythmic map quickly and I build my movements to fluency, before letting my limbs improvise. Everybody is doing this, a solo thing – yet we are bound, like one creature, in one rhythm.

Any dombolo song has this section where, having reached a small peak of hip-wiggling frenzy, the music stops and one is supposed to pull one’s hips to the side and pause, in anticipation of an explosion of music faster and more frenzied than before. When this happens, you are supposed to stretch out your arms and do some complicated kung-fu manoeuvres. Or keep the hips rolling, and slowly make your way down to your haunches, then work yourself back up. If you watch a well-endowed woman doing this, you will understand why skinny women are not popular among many in East Africa.

Related: How to Write About Africa

Posted by Wordsbody at 9:08 PM