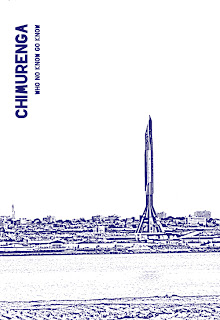 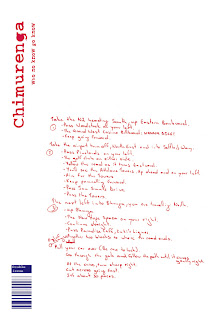 Chimurenga 13 documents the making of several Afrofuturist projects, from the speculative engineering of Abu Bakaar Mansaray to the film-work of the Black Audio Film Collective and Jean-Pierre Bekolo, and dub/death-work of King Tubby. The issue also features: Angolan composer and theorist Victor Gama’s object-oriented music writing; John Edwin Mason on the making of Abdullah Ibrahim’s “Mannenberg”; Lionel Manga on future-present Douala; Baudouin Mouanda on SAPE; Pume Bylex on his paintings; Eyal Weizman on walking through Palestinian walls; Luca Frei on the Beaubourg underneath Paris and a discussion between Sartre and Nkrumah staged by the Sharzhad Collective.
Since its very first issue in 2002, Chimurenga has received excellent reviews; writers, poets, scholars and journalists, among numerous others, have lauded its originality, the quality of its content and its willingness to tackle subjects other publications might consider too difficult or controversial to address. It is widely viewed as one of the most interesting and important publications available in post-apartheid South Africa and is fast gaining supporters abroad. Award-wining Kenyan writer and founder of Kwani, Binyavanga Wainaina, says “Chimurenga is the finest literary magazine in Africa”. Vanity Fair calls it “an uber-cool, multilingual journal spinning a funky mix of art, culture and political writing from and about Africa”. Chimurenga is available at bookstores across South Africa.

Thanks for the toot!

Wish you were here...

Wish I were there too. Enjoy the launch