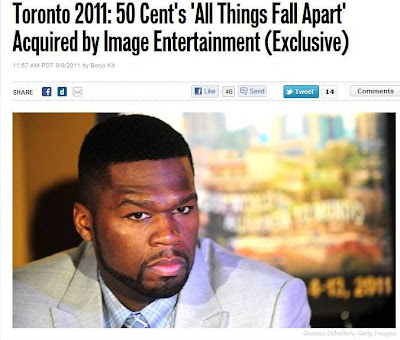 The literary world has been abuzz over news that novelist Chinua Achebe forced rapper 50 Cent to change the title of his new movie, Things Fall Apart – because it’s the same as that of Achebe’s celebrated novel.

On the inside, Nigerian writers argued over what many suspected to be a hoax. After all, you cannot copyright a title, or can you? Plenty of songs, short stories, books and yes films – with same title and unrelated content. E.C Osondu has a short story called Waiting, so does Chika Unigwe. There are at least 2 films called Relentless etc.

The story gained more credence, for me at least, when the Guardian (UK) reported it, informing that Fiddy offered Achebe one million dollars to hold on to the title, but the author took it as an insult. Achebe’s legal team retorted, "The novel with the said title was initially produced in 1958 (that is 17 years before [50] was born)... [It is] listed as the most-read book in modern African literature, and won't be sold for even £1bn." But as a commenter under the Guardian story observed, novelist Muriel Spark and Lawrence of Arabia actor Peter O’Toole both have books titled Loitering With Intent.

Was 50 Cent right to have capitulated by offering $1m in the first place, since we don’t know whether or not Achebe copyrighted his book’s title? If he d 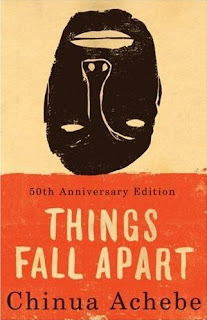 id, it would have been a highly unusual move to pull off. Highly unusual to have scuppered 50 Cent in this way, although admittedly Things Fall Apart has a highly unusual reputation as a work of literature. Achebe himself got the title of his novel from a poem by W.B Yeats, The Second Coming, so how can he lay sole claim to it?

Of particular concern to writers, I suspect, is what this dangerous precedent portends for creative works, especially writing, from now on. Someone has just published a novel the title of which is strikingly similar to my planned collection of short stories; will I have to change my title? I hope not.

Whatever one makes of 50 Cent’s declaration that he’d never heard of Achebe’s book, particularly troubling is the fact that many of the rapper’s fans – even some of Nigerian descent – were not aware of Achebe’s existence until he clashed with 50 Cent. A bizarre situation that has a gangster rapper ‘validating’ one of the world’s greatest novelists. Still, the rapper is to be commended for writing a whole movie himself, a story about an American football player diagnosed with cancer, directed by Mario Van Peebles. Because of Achebe’s objection, the film has been renamed All Things Fall Apart, reports say.

Now, I hinted that I believed the story because the Guardian published it – a stance that comes with its own problematic, since the UK Guardian can be hoaxed. The paper did a further piece on the ‘title fight’ yesterday, crediting a Nigerian news website for breaking the story. This had the curious effect of leading some to hold on to the hoax theory – it’s a Nigerian website after all. Another problematic, since a story broken in the Nigerian media is not by definition a 419 scam.

The news did not strike me as a hoax; the Guardian has unimpeachable contacts with Achebe’s representatives, agents and so on, I’m sure, to verify its story. As for the Nigerian media, lots of people have direct links to the novelist’s inner circle. Besides, if a hoax, who stood to gain from it? Certainly not 50 Cent; extra publicity for his film is hardly worth the dent on his ego. And Achebe needs the column inches like he needs a million dollars.

There are reasons why Fiddy’s people would want to remain silent on the embarrassment. The unease among the literati also means that, demonstration of his might aside, Achebe does not come out smelling of roses either. “Hawkish” is how one observer described the novelist’s action over a title he would not have been able to use had Yeats taken a different view – a title he raised no objection to The Roots using for an album years back.

Meanwhile, further confirmation of the veracity of the story: Hip-Hop bible VIBE magazine has reported it, (referencing a Ghanaian website). And the Hollywood Reporter reports from the Toronto Film Festival that Image Entertainment has picked up US rights to 50 Cent’s movie. The title? All Things Fall Apart.

Posted by Wordsbody at 7:46 AM

I first read it from the Guardian and thought it to be true. Now reading further I don't know any more. And your reservations were aptly observed. Can you copyright something you took from another? Or prevent another from using something which originally does not come from you? Several books have same title. let's see what this precedence (if indeed it is one) will lead us to. Would that mean that one has to know all the titles ever used, in movies, books, and elsewhere? A daunting task that would be.

I too found the story interesting. And I too have a title sharing problem. :( I have a novel I've been writing for about two years now called Revelations. South African Wally Serote just put out a nonfiction book with the same title. I am loathe to let go of mine because it is so perfect. I guess I'll know the outcome on this when (if?) I find a publisher for my novel.

I still think this is a publicity gimmick for 50cents camp.

I actually give 50 Cent more credit than that. I don't think it's a publicity stunt at all.

The fact that the film has suddenly acquired a new title (even on YouTube) supports the theory that something happened to change things. There has been a buzz about the formerly titled 'Things Fall Apart' since last year, when a picture of an emaciated Curtis Jackson (Fiddy) surfaced, showing his drastic weight loss to portray a cancer victim in the movie.

The film has had some publicity therefore; and has even taken the 'serious' route of film festivals. This is no 'Get Rich Quick Or Die Tryin''. It is a gloomy film by a rapper-turned-actor who wants to be taken seriously in a new discipline. It is directed by Mario Van Peebles, a previous generation actor/director of many years standing; and son to Melvin Van Peebles who appeared in Sergio Leone's great Western, 'Once Upon A Time In The West' in the 60s.

If you observe the psychology of rappers, you will note their inflated sense of machismo. Suspected publicity stunts in the Rap game are usually to sell records (like the 50 Cent-vs-The Game beef/stunt); and usually serve to play up their sense of 'manhood' and supposed indomitability. A gangster rapper will not cook up a publicity stunt that makes him look weak, even in confontation with an 80-year-old African author he probably didn't previously rate - that his public (Hip-Hop fans) didn't rate. Who would he be trying to impress?

If the author-rapper confrontation didn't happen, one or both of the parties would've been at pains to issue a statement refuting it by now, because it's an untruth that misrepresents their image and work. Because it's true, is precisely why they are saying nothing. Because that is the code, when high-priced legal teams and rich and famous clients are involved.

Gimmick, and the Guardian's coverage makes no difference. Note that the Guardian quotes no original sources: and given that they quite often pluck quotes from anonymities on twitter to pad stories, I'm a bit wary of them these days...

That aside: the Roots' album name checks the book; it's been pointed out by people far more literate than I am that Achebe took the title from Yeats; and copyright can't be established on a name unless it has a particular, unique quality. All of which lead me to believe that someone - and it may be neither 50 Cents or Achebe's immediate circle, but rather an overzealous PR person - is responsible for this lark. A good laugh all round, but nothing to see here, move along now etc.

Nice information, many thanks to the author. It is incomprehensible to me now, but in general, the usefulness and significance is overwhelming. Thanks again and good luck! 50 Cent